I met the extraordinary Jared Noel on August 26, 2014, at the West Auckland hospice where he was dying. Our first conversation was about the meaninglessness of suffering, a thesis I had taught, controversially, at Laidlaw College, and which a friend and colleague was now teaching in my place. Jared had come across the teaching at a symposium on cancer and theology. It was a bizarre experience for both of us to realise that there in that room, in that time and place, the loop had closed and I was encountering someone for whom the ‘theology’ had landed in an experience of real suffering and inevitable death. I went on to ghostwrite Jared’s memoirs, which were published a year after he died. My favourite chapter is the one on hope and the meaningless of suffering, for obvious reasons. Here’s a snippet, in Jared’s words.

What I have come to realise is that suffering is meaningless. That is why we cannot find answers to the questions we throw at it. We struggle to find the meaning to the things we suffer because there is none there to be found. My cancer and death at the age of thirty-two is meaningless. It has no inherent value. I did not get sick to serve some greater purpose or because I had done something wrong. It was not to teach me a lesson. I could spend every waking moment between now and losing cognition and I still would not find the answer to the question why, because there is no answer.

But, I can create meaning in the context of suffering. The meaninglessness of suffering does not have to be the final word. It is an opportunity. And that is the choice I face. Succumb to the meaninglessness of this world’s brokenness, or search for value in spite of it. Whether that suffering is linked to financial hardship or ill health, it is the same thing. There is no point wasting any time trying to understand their value. But to come to terms with the doors they open for even more value and meaning in your life … that is a different story.

I was always leaning this way in my understanding, I realise now. The typical questions just never worked. I have never encountered anyone who could give me a satisfactory answer to the question of what purpose does our suffering serve. But it was not until I sat in that symposium that I could formulate the dilemma so succinctly. It made so much sense in the context of my story and the wrestles I had had, the disappointments, the challenges and hurdles. Quite apart from the issue of my actual sickness I had bigger unresolved issues to contend with—the loss of vision and calling, which I was sure was from God. If I had wanted to I could have spent every moment of the past few years trying to get my head around that one. But there was no point. There was no reason why my calling had been disrupted by cancer. No meaning or explanation behind the divergent path my life needed to take. That is what suffering is. It is the imposition of meaninglessness on a life that otherwise has order and balance, goals, structures, dreams and passions, and value. It is destructive on account of the very meaninglessness inherent within it. And that is actually the greatest dilemma that confronts us. We have this meaninglessness as part of our reality, and must contend with its effects daily. Whether watching the rampant advance of the Islamic State on the evening news, or dealing with the rampant growth of cancerous tumours in my abdomen, the nature of the problem is the same. Meaninglessness is part of our world.

The part of my story that still makes me smile, even now, is that I was able to experience meaning and purpose despite this, and despite what might have been overwhelming disruption to my idea of what life was going to be. And that this happened by accident is an element of my experience that I particularly treasured.

Not everyone will sit so comfortably with the idea that suffering is meaningless. For me, it is the only way to approach the question of suffering in a way that makes complete sense. Others will continue to struggle with the issue, and that is okay too. They will point to the fact that I have been able to achieve things that I never thought possible, precisely because of the sickness I have been through. And that is certainly true. But I would say that wherever someone points to suffering as having created significance and meaning, I would argue love could do the same and more. And in most situations it is probably love that has created the meaning, not the experience of suffering. And this is why admitting to myself that suffering has no meaning has made such a difference. Suffering is a vacuum, a nothing, which means it leaves room for us to create within that space. The creative response that takes up most of that space is love, going beyond yourself for the sake of others. That happened for me accidentally as the blog generated a following and as doors began to open to stand before audiences and television cameras. But the impulse in me was always to reach beyond myself and make a difference in people’s lives. That hunger never abated, even after being handed a terminal diagnosis. In fact, I became more determined to make my life about other people.

In all of this though I have still needed to mourn. I have still needed to grieve the life and opportunities that I have lost, particularly where Hannah has been concerned, and now Elise. But being able to acknowledge that suffering has no meaning has given me the freedom to grieve those losses, at the same time as continue to find meaning in acts of love. And I have experienced more love from others than I have been able to generate for them. I have still cried. I have still felt emotion. But it has allowed me to turn them into something creative, something significant. A consequence of this is peace. Total peace. I will die knowing that I found meaning in the context of my dying. Despite it, in fact. 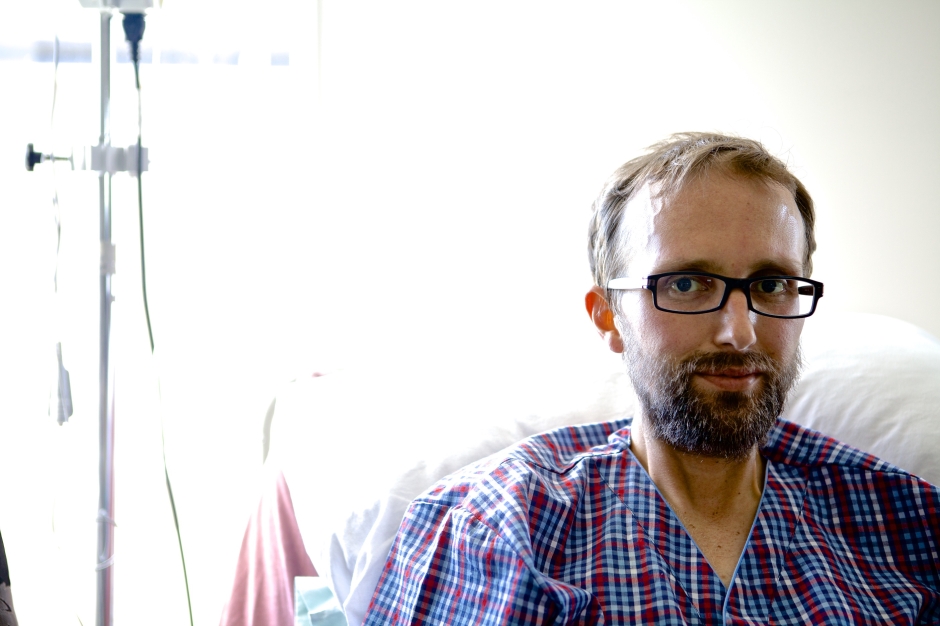