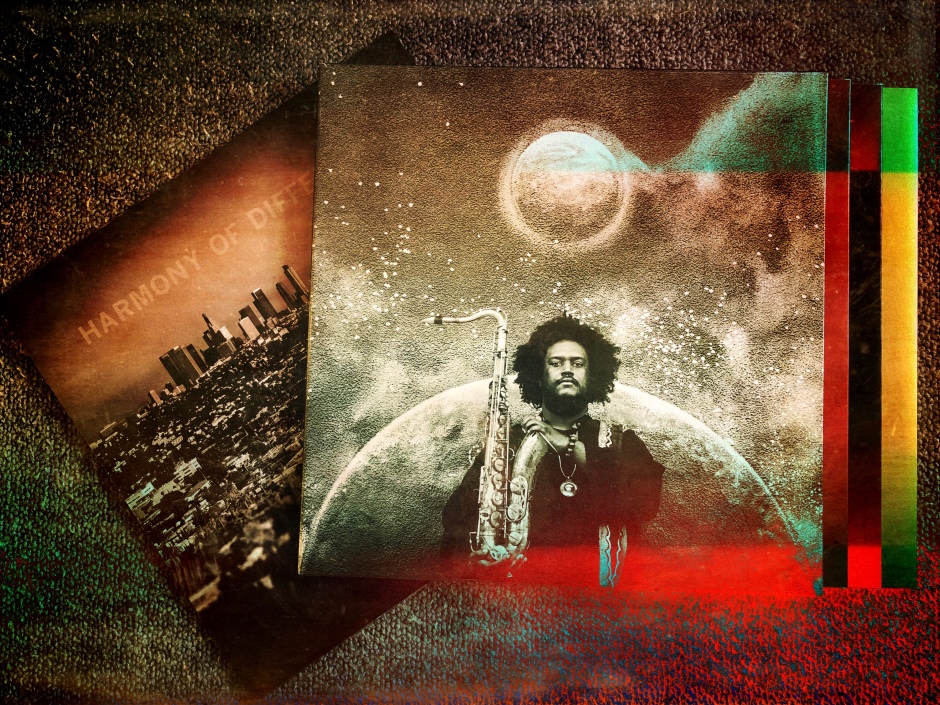 I’m gonna try and find some half-adequate words to describe the power of sax player Kamasi Washington’s music. I’m on a hiding to nothing though, because no words come anywhere close. Still, let’s have a crack.
It makes me move, body and spirit. I don’t care how I look when I’m moving either. It’s like a loudhaler shouting out what I’ve got suppressed inside. It’s big, it’s powerful, it’s wild, it’s full of spirit. It’s uncontrolled but tempered. It’s tender in some moments, frenetic in others. It makes you ‘rise up with wings as eagles’. That phrase is from Isaiah 40, and is spoken to a community that feels weak and neglected but is told to hang on, because a power they can’t comprehend is about to make itself felt. That’s how Kamasi’s music makes me feel. It’s extreme and plays on the extremities. It’s limitless and plays beyond our limits. It harmonises discordance, unsettles expectations, upends musical norms.
Okay, enough of the wank. I can’t get close—I don’t know why I try.
Kamasi’s my favourite musician at the moment. I’m mesmerised by his music’s power as well as its subtleties, its raw, brutal passion and its Star Trek capacity to transport me somewhere else. It’s so textured it’s like getting a sexual thrill from velour wallpaper.
Kamasi’s a jazz master. This is no background music, so don’t even try it. You don’t have a family dinner to these tunes. They demand to be foregrounded, like the man himself. Kamasi is huge and tall and imposing—his baseball shoes are bigger than my head. But he’s incredibly softly-spoken and humble. That’s how his tunes come across too. Complex. Juxtaposed. Differentiated.
There I go with the wank again. I can’t help it. I just wanna be a member of the band, but as a writer (I have nothing to contribute instrumentally, unless they need a didgeridoo player. I could do that).
I first discovered Kamasi through Kendrick Lamar. Kamasi is behind much of what is wonderful in the orchestral and jazz parts of To Pimp A Butterfly. When Kamasi and his big band were here for Auckland City Limits a few years ago I caught him briefly and from too far away. My true immersion in his stuff came through The Epic, his triple album boxset, and then Harmony of Difference, the EP he released last year. And finally, his show at the Powerstation in Auckland, which wasn’t even sold out. The John Coltrane of our generation wasn’t recognised enough to sell out the Powerstation! A travesty! But also a rare blessing, because it meant we got to enjoy the show with enough space around us to move, as if it was a private gig for family and friends. It was a powerful show, a real moment of catharsis. It was like crowd jumping, or floating in the ocean in Greece, or rolling down a hill in a barrel (I’ve done only one of those things). In other words, it was a free-fall. I’ve seen some great shows in recent years, but that was the best by far (yes, better than Sufjan—which is a bit like saying Easter is better than Christmas).
Much of the Powerstation show was based on the tunes from The Epic. But the show-stopper (which was a good thing, because it was the final piece of the night) was the amazing Truth, from the Harmony of Difference EP. As Kamasi himself explained, the track Truth harmonises all five melodies from the preceding tracks on the EP: Desire, Humility, Knowledge, Perspective, and Integrity. It doesn’t harmonise by fusing them though, it holds them in counterpoint. Kamasi explains counterpoint as ‘the art of balancing similarity and difference to create harmony between separate melodies.’ In terms of time, counterpoint is simultaneity, differentiated elements existing in the same moment. In terms of space, counterpoint is like a motorway spaghetti junction, as several lanes of traffic all headed in different directions suddenly pass above and below one another. Counterpoint is glorious. It provides a hyper-tense, thrilling experience in which you’re drawn into the convergence of musical themes and pathways that ordinarily wouldn’t hold together. But here they are, co-existing in a dynamic suspension of typical rules and possibilities. The message behind Truth is an obvious one: Truth lies in the possibility of counterpoint itself; in the harmony of differences. Not just musical differences either, but also racial, cultural, religious, sexual differences.
I love this idea. I’ve been thinking and writing around counterpoint and differentiation and simultaneity for years, ever since my doctoral work on Mikhail Bakhtin, a Russian literary philosopher who coined many of the phrases we use today to describe the phenomenon of truth generated by difference, or dialogue, or even conflict. Bakhtin’s big thing was dialogism—that there is more truth in the conversation of competing, differentiated voices—the polyphonic—than there is in the proliferation of one voice, or one idea—the monologic. Bakhtin says UNITY is never defined as SAME AS, but rather SIMULTANEOUS WITH. In other words, unity is present when differences co-exist in harmony (the harmony of difference), not when they fuse into one entity. This is love, in my understanding of it—differentiation and togetherness, highlighted in moments of encounter, when the self treasures the otherness of the other.
This all came to mind during the extended performance of Truth at the Powerstation. Well, maybe a bit later when I had time to take a breath and reflect. Truth was mind-blowingly complex in real time—seven musicians (including two drummers), all playing completely different melodies, and all of them converging to form a beautiful whole.
I’m listening to The Epic now as I write. It’s bloody incredible. Re-run, from Vol. 2, is an amazing track. And The Magnificent 7, the first track from Vol. 3. BLOODY HELL!!! Truly amazing.
It’s just about the best thing in my record collection. At least it will be until Kamasi releases something new.
Oh, would you look at that! Heaven and Earth was released yesterday. Gotta go.